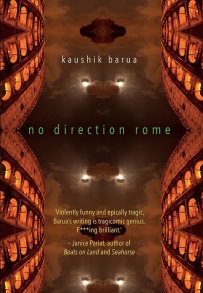 “Life is a lot like Kim Kardashian. There’s no reason to it. There’s no point to it. But it’s there”….. quoted from No Direction Rome.

Now I really don’t know which genre Kaushik Barua’s No Direction Rome will fit into. For me it is definitely not a literary masterpiece!!! But, it does fall into the category of books that make you pause and introspect, and then accept the fact that ,”Yes, this is true”!!!! But again, it makes you wonder, ” What’s the point the author is trying to make”!!!!!!?????

This dark, first person satirical narrative gives a peak into the directionless life of Krantik-an expat in Rome, with a job he doesn’t like, a whacko fiancee who tries to commit suicide, coke-sniffing coworkers( who are the only friends he has) and a turtle obsessed landlord. As a pastime, Krantik goes around asking strangers for directions and this is how he meets Chiara, an Italian girl who is also drifting along directionless. There is definitely a spark between these two drifters, but the author takes forever to make one of them realise that.

There are glimpses of clever and profound writing, which did remind me of Arvind Adiga and Mohsin Hamid, but those glimpses get overshadowed by the directionless and jagged narrative. Kaushik Barua has tried to write in a very contemporary style and his analytical  insight into today’s disgruntled, disinterested, tech-savvy generation is quite accurate. “If you had two hours to live, what could your message to the world( your last Facebook update) be?”……..quoted from No Direction Rome.