Walking With Nanak by Haroon Khalid 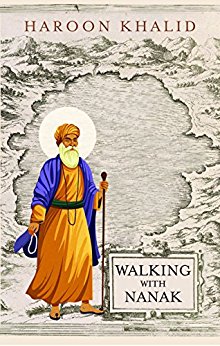 For a wondering Sikh like me who constantly questions if Sikhism today truly reflects the spirit of Guru Nanak and his teachings, this book by Haroon Khalid was a wonderful validation of Nanak’s contemporariness . That Walking With Nanak is written by a Pakistani Muslim made the book even more appealing.

After all, as Khalid reminds us in his book, Nanak belonged to the place we now know as Pakistan. He was born there, and spent a lot of time between his travels in modern day Pakistan. Before partition, Nanak was revered by Punjabis – Hindus, Muslims and Sikhs. While Pakistani history is silent on Nanak and his legacy, Nanak’s poetry has shaped the development of the Punjabi language and the Punjabi identity. Through the book Khalid has attempted to discover Nanak the son, husband, father, philosopher and wanderer. And he does it with love, care and meticulous research.

Walking With Nanak has an interesting structure. Like Nanak traveled with Mardana, his friend and disciple, Khalid made this journey of discovering Nanak and his teachings with his mentor Iqbal Faisal. Iqbal Faisal’s book on Sikh shrines in Pakistan has been instrumental in Sikh groups pressuring the Pakistani government into maintaining these historical places. The book shifts between Nanak-Mardana stories, Faisal-Khalid interactions and tales from the various Janamsakhis that narrate the life of Nanak. Khalid also quotes the Guru’s poetry throughout the book.

One of my favourite Nanak stories is how he blessed the villagers who had been mean to him to always stay together, and told the neighbouring villagers who had been generous and hospitable to him to spread out into the world. Mardana thought this was unfair on Nanak’s part and questioned him on his blessings. Nanak said that he blessed the first village so in order to confine the evil and negativity to that small village. He wanted the goodness of the second village to spread across the world and make it a better place.I was delighted to see it mentioned in Khalid’s book, though he thought Nanak might have been unduly harsh on the first village. According to local lore, the villagers were not kind to Nanak because a few weeks ago they had been hoodwinked by a set of holy men!

Walking With Nanak also explores how Sikhism as a religion developed, how each subsequent Guru imparted his own personality to the new religion, and how the political climate of the times were instrumental in shaping the Sikh identity.

Khalid’s book reveals that Guru Nanak continues to have a following among Sikhs, Hindus and other communities in the Indian sub-continent. His teachings are even more relevant in these times when there is so much push-back and hatred against religions and people different from us. His inclusive teachings might help bring some sorely needed perspective religion and humanity.

Haroon Khalid’s book is an absolute delight, and whether you are religious or merely interested in religion as a subject, Walking With Nanak should be on your reading list.

This entry was posted on March 20, 2017 by Preeti Singh in Book Reviews, Contemporary, Non Fiction.