Queen of Ice by Devika Rangachari ; Reviewed by Nishna Singh 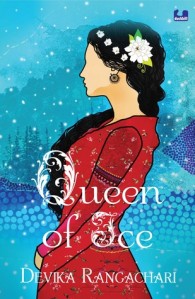 The young adult historical novel Queen of Ice, written by Devika Rangachari, displays the world of Queen Didda of Kashmira from CE 980/1-1003. A tale of friendship and courage, it tells the story of an ambitious but lame queen who fights her way to the top of the royal court and fulfills her destiny. Told from two perspectives, one of the queen herself and one of her servant and childhood friend Valga, the novel raises some important ideas about female power, trust and family.

Fast paced, the novel moves rapidly from Didda’s childhood to her marriage with King Kshemagupta of Kashmira, to her rise to power and the lines she will cross to achieve it. Although Queen of Ice tells the story of a power-hungry ruler, a common story told by a thousand authors, the dual narrative changes the game, incorporating into the story a fresh, human perspective. Each chapter, told by either Valga or Didda, takes the story further instead of repeating events. This, although leaving out details of the emotion felt by either, was an effective way of pushing the story forward.

Didda’s shift from an innocent, ambitious princess to a bloodthirsty, powerful queen was gradual throughout the book, but some of her actions were unprecedented and contradictory to her character – for example, her trust in Tunga after what happened with her earlier advisers.

What I liked about Didda was that she is not a fairytale princess. She does not come across as a particularly lovable character; self-involved and arrogant, the queen did not care for her friends or family but her beauty, drive and spunk kept me hooked on to reading more.

The novel is well written and ideal in length, though sometimes I felt confounded with sudden events that had no forewarning. I wish deaths were mourned and celebrations were celebrated.

Yet, Queen of Ice, and its wonderful cover, kept me engaged throughout. A definite read.