Interview with Devika Rangachari, author of Queen of Ice 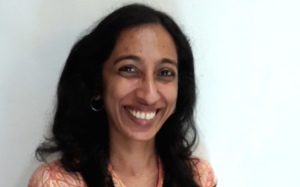 Devika Rangachari has won several awards for her children’s writing. Her book, Growing Up (Children’s Book Trust, 2000) was on the Honour List of the International Board on Books for Young People (IBBY) in 2002. Her other books include Harsha Vardhana (Scholastic, 2009), The Merry Mischief of Gopal Bhand (Scholastic, 2007), The Wit of Tenali Raman (Scholastic, 2007), When Amma Went Away (CBT, 2002) and Stories from Rajatarangini—Tales of Kashmir (CBT, 2001). Devika helps to run the Children’s Book Forum at the India Habitat Centre, New Delhi. She is currently engaged in post-doctoral research in Indian history. Here we chat about her latest book ‘Queen of Ice’ and more!

tgbc: What about Didda was so fascinating for you?
Devika : Her personality, her ambition, her determination, her passion—and so much more!

tgbc: What do you think was her major flaw?
Devika: I don’t think she had a single major flaw. Her character had shades of black and white—just as that of everybody else.

tgbc: How true do you have to stay to history while writing historical fiction?
Devika: Historical accuracy is my foremost concern while writing for young adults. Conveying an erroneous version of the past is both irresponsible and inexcusable, so I ensure that even my characters are real historical figures and not invented ones. I want my readers to learn historical facts, not unlearn them!

tgbc: What does it mean to be a writer?
Devika: It means being someone who reads voraciously, is slightly quirky and has a sense of humour. It also means being able to write!

tgbc: Who are your book mentors?
Devika: This is virtually unanswerable. I admire a vast range of writers whose names I can’t possibly enumerate or I will use up all your space!

tgbc: What do you do when you are looking for inspiration, or facing a writer’s block?
Devika: It helps to have gentle-but-stern publisher-friends who are willing to feed you chocolates and potatoes till the block unblocks itself.

tgbc: Did you have the opportunity to explore some Kashmiri cuisine of the period? What were the favorites then?
Devika: No, I haven’t yet had the opportunity—and some of the favourites are already mentioned in the book.

tgbc: What is your favorite quote?
Devika: My father’s dictum—‘Why not the best?’

tgbc: What next?
Devika: A book on love stories from history and legend, and several ideas for historical fiction that are fluttering around in my head. Need more potatoes and chocolates here!

One comment on “Interview with Devika Rangachari, author of Queen of Ice”

This entry was posted on March 1, 2015 by Preeti Singh in Interview, Interviews, Young Adult and tagged Devika Rangachari, Queen of Ice.