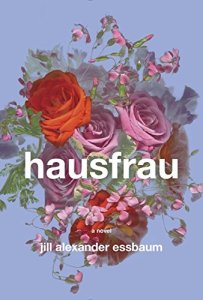 Hausfrau is poet Jill Alexander Essbaum’s first novel, and the beauty of her words carries forward this story with a fairly thin, albeit absorbing plot. A stranger in the country she lives in, claustrophobic in her small Swiss village, the mother of three kids, and wife to a Swiss banker, American Anna is a deeply unhappy woman. She does not know the language, does not have a driver’s license and no close friends. She feels trapped, and there is no other place for her to go to. America is no longer home since her parents are dead, and Switzerland does not feel like home either! She undergoes therapy with Dr Messerli and joins a class to learn German after nine years of living in the country. In addition, Anna has affairs, physical not emotional ones, even as she tries to find meaning in her life. She is constantly analyzing the different versions of her love. At first glance, it is difficult to understand why Anna is so desperately unhappy, until one begins to see the world through her eyes. Her husband Bruno is cold, undemonstrative and tired of her dark moods; her mother in law Ursula does not like her; the Swiss are polite, but do not welcome her into their inner circle, and she has no friends of her own. In addition, she is heartbroken, in the aftermath of the affair that ended suddenly, and has given her Polly Jane, who Bruno thinks is his child. And just when Anna decides that she will stop doing what she is doing, and pay more attention to her family and Bruno, disaster strikes. In addition, the question that her new friend innocently asks about who Polly Jane looks like, brings her world crashing down. It is wonderfully crafted – sessions of psychoanalysis with Dr Messerli, the intricacies of German grammar and Anna’s own journey are perfectly coordinated. The author also has an eye for detail and the Swiss landscape, and Swiss behavior are well etched. Anna’s incredible passivity – her unwillingness to do anything constructive to rouse herself from her depression – frustrated, angered, and aroused deep sympathy from me in equal measure. The book gripped me, and there were many parts that I highlighted because they were so beautiful. I wished though that Anna was less passive, and in the end, her one act of some sort of action, was that of a coward! Or maybe she really is not passive at all. Maybe she is as the Doctor saw ,”Passivity isn’t the malady. It’s the symptom. Complicity is but one of your many well-honed skills. When it pleases you, you are quite practiced at defiance.” This is a modern day Madam Bovary and Anna Karenina, but there is suspension of belief at many occasions. A definite read, but prepared to be exhausted with Anna, her weird liasons, her not taking charge of her life, and her cowardice.