Footprints in the Desert by Maha Akhtar 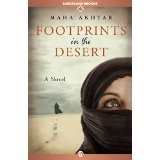 There can be nothing more heartbreaking than a storyline that fails to connect with the reader and with Footprints in the Desert, Maha Akhtar proves it. The blurb online, promises an exciting tale set during the fall of the Ottoman Empire, revolving around a group of women who live and love in the midst of the Arab Revolt. The protagonists of this fictional historical novel are Salah and Noura. Sarah is an important link in the Arab revolt against the Ottomans, while Noura, his best friend’s widow personifies the collateral damage suffered by those who are linked with the revolutionaries.

Salah and Noura find themselves in Cairo, Salah’s hometown and the bustling El-Khalili bazaar serves as the stage for their rekindled love as well as for all the excitement of the cat and mouse game between the Ottoman secret police and Salah. By adding the awe-inspiring character of ‘Lawrence of Arabia’, Akhtar hopes to make her novel larger than life. But the character in Footprints in the Desert, is quite different from the Peter O’Toole ‘Lawrence’ as shown in the 1962 classic Lawrence of Arabia. There are many different characters who support the storyline, Salah’s revolutionary friends, his mother and the other women who meet up everyday at Rania’s Cafe. While Europe is fighting it’s war and the tensions in the Arabian peninsula escalate, these women share their joys and trials over coffee, narghile, hummus and falafel.

One wonders why this novel fails to reach it’s potential. One of the main reasons is that the characters are one-dimensional and fail to connect with the reader. The story idea is a powerful one- to see the struggle through the perspective of the revolutionaries and their families and friends, but the narrative comes across as superfluous. The only thing that stands out is the epilogue and if you are a history buff, you will enjoy reading about the Arab Revolt. I went on further to google Lawrence of Arabia, in order to refresh my memory. The mystery behind the title unravels only once you have read the epilogue, which for me was sad. What could have been an epic novel turns out to be an unrealistic work of fiction, which concentrates more on the frivolous lives of the female characters and the over the top portrayal of the revolutionaries, who miraculously escape blasts and ambushes.

This entry was posted on August 19, 2015 by artikaaurorabakshi in Book Reviews, Fiction, Historical, Uncategorized and tagged Arab Revolt, Footprints in the Desert, Lawrence Arabia, Maha Akhtar.