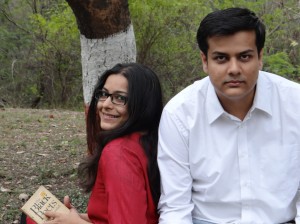 We enjoyed The Heat and Dust Project by the couple; among the many things that charmed us – the Rupees 500 per day budget, stays in places that Indian tourists do not usually patronize and the details of small towns and their people. The overriding curiosity of course was how they came together to write a book!!

A charming interview with Devapriya Roy and Saurav Jha!

tgbc: How did you decide on the places you wanted to travel?

DR/SJ: Mostly Impulse. Sometimes, a general sense that we might a better story. We went from Delhi to Jaipur because we had gone there once in the past, and we had always meant to return. But after Jaipur, it was entirely on impulse, local suggestions and the need to rest childhood curiosities.

tgbc: How did you come upon the amount of Rs 500 for daily expenses?

DR/SJ: Well, we needed a nice round figure that would definitely push us out of our comfort zone. 500 seemed about right. The idea of the tight budget was very important though. Mainly, we wanted to see India ground up. And also we wanted our limited savings and our tiny advance received for the book to last as long as possible.

tgbc: Apart from the heat and dust, what struck you the most about the Indian landscape?

DR/SJ: The idea of calling it The Heat and Dust Project was to play around with the heat and dust trope that the goras love so much. I don’t think Indians notice the heat and dust particularly, unless the place is very exaggeratedly hot and dusty. Otherwise, it recedes in the background.

What stood out in the landscape? For one, large parts of India are still green and agricultural. Though that is changing very very quickly. Advertisements for 2 BHKS and 3 BHKS are cropping up in the oddest of hamlets, and the city is gobbling up greenfields almost nightly. That transformation is etched on the face of the land clearly, and it disturbs the balance, as well as underlines the very sweeping nature of how nations change. We need to understand the processes at work better. Otherwise, suddenly it will be too late.

tgbc: If you had to distill the lessons you learnt about Indians, what are the three things you would say?

DR/SJ : 1. In general conversations, Indians tend to say what they think the questioner wants to hear. They are compulsive pleasers. So to hear what they really feel, you have to commit to the conversation, dissembleas well as be utterly truthful, talk for a long time, give away lots of personal information and through a mix of all this, perhaps be able to disarm them.
2. Young Indians are all aspiring to the same thing. Carry a laptop to an office: that is the mono-colour dream of the future. So many young men have convinced their fathers to sell agricultural land in order to study in a nefarious engineering college or B schools, at the end of which they find their promised jobs do not exist.
3. Everything you hear about Indians is true. The exact opposite of everything you hear about Indians is also equally true.

tgbc: How did you both put the book together-with your separate sections and themes?

DR/SJ: Putting the book together was a challenge alright. It took years and years to craft, to achieve a balance of elements. We worked separately, then together, then separately again at the edits stage to ensure it all came together. We should congratulate our editor Shantanu and publisher Karthika for bearing with the extremely complicated process.

tgbc: What is the one thing you wish you had done?

tgbc: What is the one thing you wish you had never done?

DR/SJ: Spent the whole day fighting in Jaisalmer over said safari, among other things. (Of course, the fight offered an important break in the book. So I suppose it played a part too!)

tgbc: I got the sense that you both got clarity on what you wanted to do in the future. But how did the journey together, and the act of writing the book together change you both – as individuals and as a couple?

DR/SJ: I think we have come further away from the idea of being ‘settled’ as individuals, and as a couple, than when we had first thought of the project. It was merely academic then. I think we are now able to live with that more easily.

tgbc: What is the weirdest thing you ate on your travels?

tgbc: Would you recommend the travel to other young Indians? What would be your advice to them?

DR/SJ: Oh yes. Just travel. Read lots of Indian books – whether in English or the Indian languages – and travel to the worlds they evoke. If 500 is too less, set your own budget. That is perfectly fine. The idea of the budget was to free one from a certain horror of luxuries, which make all places feel the same.

tgbc: How do you think your perspective was different from the firangi one?

DR/SJ: I think the very nature of the gaze is different. For one, we are quite clear that this book is firmly in the tradition of travel accounts in the Indian languages; a mix of humour, story telling, conversations, and the sense of many languages that comes from being a multi-lingual people. I think the Indian mind is cast in a multitude of languages. There is a chapter called ‘How to Write in Indian’ which tries to engage with these issues head one. What does it mean to write an Indian – as opposed to firang – book about India in English?

tgbc: How did the hurtling pace of the travel keep pace with the emotional/mental churn that you might have been going through?

DR/SJ: The hurtling pace and the consequent emotional and mental churning is going to be a major sub-theme in the second book. Especially because in Man.Woman.Road. we go from Delhi to Kanyakumari, all on local buses, and the intensity of the journey certainly plays a role in allowing some inner demons out. In the first book we’ve given only glimpses of the inner churn. Mainly because the first book is meant to set the tone for the rest of the series.

tgbc: What next? As a couple and as independent authors?

DR/SJ: As a couple, of course, the future is cast in print. Man. Woman. Road. the sequel. Individually, Saurav’s next book is serious non-fiction and deals with the nexus between energy, food and water and its link to economic growth. I am torn between writing a crackling romantic comedy and a series of interconnected pieces, part memoir, part fiction. So am completely at sea.

This entry was posted on August 26, 2015 by Preeti Singh in Uncategorized and tagged devapriya roy, saurav jha, the heat and dust project.