The Tiller of Waters by Hoda Barakat 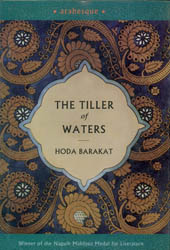 Hoda Barakat was born in Beirut in 1952 and brought up in Bsharré, Lebanon. She has worked in teaching and journalism, and has published five novels, two plays, a book of short stories and a book of memoirs, as well as contributing to books written in French. Her work has been translated into a number of languages.

She has received critical acclaim in the Arab world and abroad and was awarded the Naguib Mahfouz Medal for Literature for her novel The Tiller of Waters. This English translation is by Marilyn Booth.

Niqula Mitri is alone in a devastated Beirut, that he does not recognize any more. The landmarks he was familiar with no longer exist, and he roams all alone in the bombed out souk where his father used to own a store. Niqula then discovers the basement of the destroyed store, and discovers all the beautiful cloth his father had stored there.

Three stories run parallel in The Tiller of Waters. The journeys of his and his maid Shamsha’s families; the history and origins of cloth like linen, velvet and silk, and the decline of culture as reflected in the popularity of nylon and other synthetics; and the decline of Beirut and the hallucinations of Niqula that reduce him to an animal like existence.

The Tiller of Water is a commentary on the loss – loss of a homeland, loss of a way of life and loss of love – and mechanisms to cope with the loss. In that abandoned city Niqula becomes animal-like, marking his territory with his piss, discovering new places and hallucinating about the rest. A Kurd without a homeland, Niqula’s maid Shamsha says of her plump body, “I am fat because I have no country. I eat so my body will grow, so that I can plant its weight firmly on the ground; so that my body will sense the world there.”

Hoda Barakat spins a powerful story of the origins of cloth, and the weaver being the trustee of the secret of life and peace, and uses references from across the world. “Think of the sage Gandhi, who took up weaving as he faced the English because, according to the Indian myth, the goddess demanded that the warrior caste transform themselves from fighters into weavers ..”.

The commentary on cloth that is being replaced by synthetics is a reflection of forgetfulness of the important things in our lives, “Who, these days, sees in a length of cloth its origin, its place of birth, the caravans’ voyages? Who detects countries and regions, histories and stories, massed like a miracle in this city of ours ….And when the words of the grandfathers begin to be forgotten, the knots and threads in the weaving begin to come undone and the world ends in fragments, shapeless, a dust cloud in the nebula.”

There is hope yet – new life forces itself through worst conflicts. Niqula begins to collect and forage for new plants that shoot up in the most extraordinary places and plans his own little garden.

The Tiller of Waters is an interesting read, especially if one is familiar with the Mid-East culture and history. I liked it especially for the fact that it stays away from the politics of the Mid-East and instead focuses on what conflict has done to ordinary human beings who must survive – against all odds.

This entry was posted on September 27, 2015 by Preeti Singh in Book Reviews, Contemporary, Fiction and tagged Beirut, Hoda Barakat, Kurds, Marilyn Booth, The Tiller of Waters.