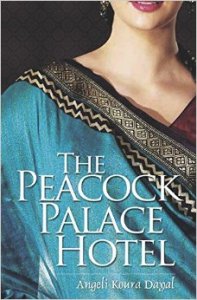 A twist of fate entwines the lives of three people who ordinarily would never have crossed paths. Robby, a product of Hollywood is fraught with emotional issues. Sundri makes her humble, rural beginnings in the shadow of the glamorous, world-famous, Peacock Palace Hotel. Saloni is a carefree, vivacious Delhi girl with a thirst for adventure. Their dramatic lives unfold in a saga of secrets, romance, heart-break and hope.

It’s the cover that first caught my interest!!!! Angeli Koura Dayal’s The Peacock Palace Hotel is a debut novel by a well known Delhite. For me the plot was very fairytale like……. don’t we all just love reading fairytales once in a while??!! I thought I could predict the story and as I read on, I added my own twists to the saga, hoping I would be right. While at some points my guesses were accurate, there were times when Angeli’s story took an unimaginable turn. Subconsciously, I was aware that this is Angeli’s debut novel and as it goes with most first publications, there is a raw, yet  fresh tinge around them. As I read on, I was caught between critiquing it- by nitpicking on the flow of the narrative at some points, and by total admiration for an author who gave it her all to put out a story she believed in. Thats when I decided to interview Angeli and find out all that was there behind writing this novel. Her responses gave a glimpse of her life journey and aspirations. I look forward to reading her next. 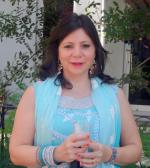 Angeli Koura Dayal was born in Delhi, India. She has a German mother and Indian father. She was educated at Cornell University, New York, USA and earned a law degree from Delhi University. She lives with her family in Delhi and is a legal associate with the law firm Koura & Company. Her multicultural background and extensive travels have greatly influenced her writing.

TGBC: What prompted/ inspired you to write this book?

Angeli: Without a doubt, my rich childhood had a major role to play in my writing. As a family we travelled all over India and abroad. We had many adventures during the course of these travels. When my children were little, these adventures became the material for their bedtime stories. They thoroughly enjoyed them and complemented me on being an interesting story teller. While the children were at school I had some free time on my hands and decided to use it to pen down my adventures for my children, without any intention for it to go further than that. The hours would fly, and I loved getting lost in reliving the stories through my writing. At the end of my efforts I had a lovely life story strung around my childhood adventures and growing up in Delhi. I printed it out, bound it, and gave it to the kids and my childhood friends (who well featured in it) to read. Everyone thoroughly enjoyed it and gave me the idea to publish it. That’s the first time I ever considered publishing my work.

However, being an avid reader myself I believed that the story was too linier and need more intrigue and depth of plot. That’s when I put the first book aside, and from thin air created the characters featured in The Peacock Palace Hotel, namely, Robby, Sundri (and other secondary characters of Rebecca, Robert, Patricia, David, Garret and Bela). The idea was to develop characters to complement the character of Saloni (based loosely on my life from my original story). The plot developed around the characters and the story took a life of its own as if the characters were alive and had their own story to tell. I guess my frequent visits to Neemrana Palace, which is essentially the Peacock Palace Hotel subconsciously played into the book in a major way.

I did quite some research on life in Rajasthan and Hollywood to keep the story as realistic and credible as possible.

That’s pretty much it: a rich childhood supplemented by an active imagination!

TGBC: How long did it take you to write/re-write the story?

A2.The total time taken including writing the first book, parts of which loosely formed the basis for The Peacock Palace Hotel and the rewriting of passages till they were completely satisfactory to me, I would say about 7-8 years.

TGBC: Once you completed the manuscript how easy or difficult was it to get published?

A3. I tell people that as a debut author the easy part is writing the book. Finding a publisher who will consider a new author is like trying to make a hole in a concrete wall with a nail file. Doors of rejection are constantly slamming shut in your face which makes it very difficult to keep up a positive attitude. If you can keep your patience through all that rejection you just might get lucky like I did.

A4. Well, I was very clear that my future as an author would ride on the response to The Peacock Palace Hotel. It’s a monumental effort to write and publish a book. I gave it my very best. If that’s not good enough then clearly I’m in the wrong field. Having said that, I have written almost half my 2nd book. So far I am ecstatic that the book has received a great response from people of all ages and gender (85 year old male to 20 year old female) who have messaged me, emailed me and some have put up their comments the internet. All the readers have asked when my next book is coming out.

So now that I have some confidence that my book hasn’t completely fallen flat on its face, and I may actually have a future as an author, I plan to stay this course for now and hopefully come out with a sequel within the next year. It’s been a big decision because my full-time law practice (which is my bread and butter) will have to take a backseat to my writing for the time being. That’s why the phrase “starving artist” or in my case, “author”.

This entry was posted on November 8, 2015 by artikaaurorabakshi in Book Reviews, Contemporary, Fiction, Interviews and tagged Angeli Koura Dayal, The Peacock Palace Hotel.