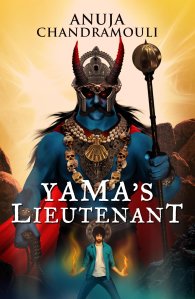 What if all accidents, acts of passion and hatred, of divisiveness, illness and violence, were not human reactions to situations, but guided by spirits who repent nothing, and whose evil cannot be cured in hell? How can mere mortals stand up to these evil doers, when even Yama, the Lord of Death and the Underworld, has been unable to contain them. And Yama’s weakness has made the world an even more dangerous world to be in.

Like all twins, Agni is inextricably bound to his sister Varuna. As a small child he had promised his twin I will never leave you! I promise!, and twenty four years later this statement comes back to haunt him. He had failed to protect Varuna, and she was dead. And Agni is on a bizarre path. Mostly, he tried not to think about the things he was expected to do. The things he had done ensured that he would never know a good night’s rest, free from the nightmares, the shrieks in his head fit to bust his eardrums or the visions drenched in blood.

Agni is now Yama’s Lieutenant. He must ensure that the unrepentant who escape the terrible punishments of Yama’s hell, do not find their way back into the human world and create mayhem there. But Naganara, the great necromancer is on the rise and he summons forth the Narakamayas. Seven in all, spawned by hatred and madness, the Narakamayas are indestructible. Bhaya inspires fear, Sokka and Dukkha bring grief and sorrow, Vyadhi spreads pestilence, Trshna flames desires, and Krodha instills anger. These six, Naganara sends into the world to spread their gifts, and retains Sudhana, the Narakamaya, whose sole purpose it is to kill. And he must kill Agni.

Before Naganara and Sudhana gets to him, Agni must seek Yama’s willing bride-to-be and transport her safely to the underworld -she alone can help Yama gain his strength and defeat Naganara! And when Agni finds out who Yama’s bride is, he is shattered.

Drawn from mythology, and rich in characters that make up a fantastical world, Yama’s Lieutenant is an eminently readable book. The story of Agni and Varuna moves alongside the story of Yama and his sister Yami, and how Yama, the handsome, intelligent and compassionate son of Surya, the Sun God, becomes the Lord of the Underworld. The necromancer’s evil is fascinating. The landscapes the story traverses are incredible and you could almost close your eyes and let the scenes wash over you.The end seemed easy and a foregone conclusion, though it does not take away from the beautiful execution of the narrative.

I am not into fantasy novels, but Yama’s Lieutenant held my attention. The pace of the novel never falters,the characters are well drawn, and the fantastical world is relatable and almost real!