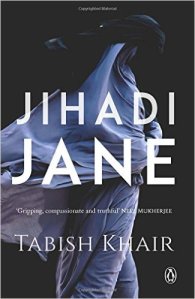 Tabish Khair’s heart-wrenching narrative comes at a time when ISIS poses a worldwide threat. The Islamic State was founded by a handful of fanatics; now it holds the world to ransom. Its reach goes beyond the geographical territory it occupies. Millions have been affected by it’s warped ideologies and offensive actions. The fictional narrative of Jihadi Jane, brings to light the human side of  militancy and fanaticism. When and why does religion turn into self-consuming miscreation?

For Jamilla, her religion has always been an integral part of her being. Her friendship with Ameena, starts in the school playground, when she stops Ameena from smoking a cigarette. Both belong to immigrant families, and while Ameena feels at home in England, Jamilla and her family have always felt alienated, struggling to be at home, in the country of their choice. A strong bond of friendship forms and Jamilla helps Ameena reconnect with her religion, much to the dismay of Ameena’s mother. As Ameena’s trips to the mosque increase, the distance between mother-daughter increases. Jamilla is left wondering whether she has done the right thing. In her new found religious strength, Ameena chooses to follow the righteous path and takes submissive Jamilla with her. The Internet helps them connect with other Islamists and together they choose to dedicate their lives to the Jihad. Influenced by a firebrand Internet preacher, the girls decide to leave England…

“…She told me that she was organising with Hejjiye and some others to join Hassan in Syria-why don’t I go with her? I hesitated, tempted by the promises and the vision of joining a righteous fight,…You might wonder how I could be tempted….I have grown up in a family wherein complained relentlessly about the compromises that living in England entailed their faith….We were far from convinced, then, that the Western media were being objective or factual….Most of the Muslims I knew had such doubts then….no man, not one Muslim man, no matter how believing, how faithful, how orthodox, has to face a third of the difficulties that orthodox Muslim women encounter in the West….It builds up a core of bitterness in you….Sometimes I felt I would do anything to be free of all this, to be myself without being considered a monster or a curiosity. From what Hejjiye and the others were telling us about the newly created Islamic State, it seemed to br that sort of place, a country where I thought I could be myself….”

In Syria, the girls move in with Hejjiye and persevere all odds, to help fight the “good fight”. What follows not only tests their friendship, it makes them rethink their reasons for becoming “Jihadi Janes”- militant brides.

Narrated by Jamilla, the story evokes sympathy, pain, anger and despair. Khair’s deft and introspective writing, makes the reader connect with the characters. While Ameena and Jamilla are the protagonists, characters such as Alex, the school heartthrob, Mohammed, Jamilla’s brother, Hejjiye, the powerful preacher and Hasan, Ameena’s Jihadi husband, all play an important role in making the plot credible. This dramatic monologue gives a face to the countless women, who have knowingly and in most cases forcibly, given their lives to this heinous cause. The book reminded me of Mohsin Hamid’s The Reluctant Fundamentalist. While Hamid’s narrative made the readers empathise with Changhez, Khair’s recount sheds light on the ever-increasing problem of bigotry and misguided ideologies and how it affects countless women. It makes one empathise with the real Ameenas and Jamillas and all those connected with them.