The Nerdy Dozen by Jeff Miller

THE ENEMY FIGHTER JETS SURGED PAST NEIL ANDERTOL, soaring over desolate, sandy terrain. Neil glanced out either side of his cockpit window. Two planes from his own squad were flying parallel to his.

“Those our last ones?” Neil asked.

“Roger,” said the pilot to his right. “They took out our other guys. It’s just us three now.”

Neil firmed his grip on the flight controls….

“Neil Andertol!” bellowed the voice. Neil concentrated on the hum of his aircraft and the rhythmic beeping of his missile targeting system. He positioned himself directly behind the enemy jet and locked onto his target.

Then, suddenly, everything went black….

Jeff Miller’s The Nerdy Dozen is the story of thirteen year old Neil, who along with eleven other kids, joins a top-secret mission. Their quintessential gaming skills are what the Air Force requires. Leaving their virtual world, Neil and his friends get out into the real world and fulfill their flying dreams. They also use their skills to save the world!

The Nerdy Dozen and the two subsequent books, Close Encounters of the Nerd Kind and 20,000 Nerds Under the Sea, are sure to appeal to the adrenaline junkies of today. Video games; Secret Mission; The Ultimate Annoying Sibling; Shared Injustice Amongst Kids; it all comes together to keep the young ones glued to the books and away from their controllers and screens!

Recommended for ages 8 and above. 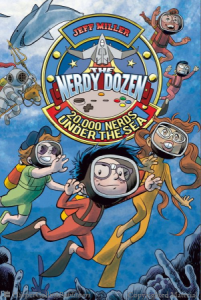 This entry was posted on January 19, 2017 by artikaaurorabakshi in Book Reviews, Fiction, Kids, Modern Fiction and tagged 20000 Nerds Under The Sea, Close Encounters of the Nerd Kind, Jeff Miller, The Nerdy Dozen.