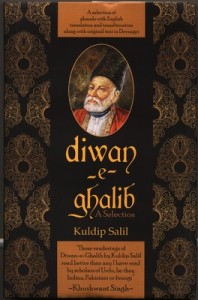 Ghalib is the greatest Urdu poet and one of the greatest in any Indian language. He would rank perhaps among the great poets of the world.With Meer, Ghalib, Iqbal and Faiz, to name only four, the firmament of Urdu poetry is truly star-studded.Ghalib’s stature is growing with every passing decade.This is a selection of the best and most popular Ghazals from Diwan-e-Ghalib. For the convenience of readers original Ghazals have been given in Hindi as well as in Roman script. Meanings of difficult Urdu words have also been give in footnotes.

An apt gift to lovers of poetry!!

This entry was posted on October 4, 2014 by artikaaurorabakshi in Book Reviews, Non Fiction and tagged Diwan e Ghalib, Mirza Ghalib.