The Path of the Swan by Charu Singh 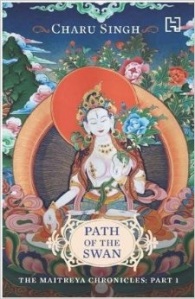 In an age where the world stands in imbalance and nations fight against each other, Lama Ozer hears the summons for a great change! The chakras turn to bring back harmony to the world of mortals and celestial beings and create circumstances that will lead to the birth of Maitreya, the saviour. The Path of the Swan follows the travels of Lama Ozer and young Tashi from the mortal world to the legendary Shambala and back to Earth in the company of two legendary princes and The Golden One, Yeshe Nam Lha, the daughter of Tara.

The author paints a pretty picture with words. The stark beauty of Sikkim and Tibet come alive as one reads through the first few chapters of the book. Then the story takes an unimaginable turn and the reader is transported to the mythical realm of Shambala. Shambala, with its golden skies, azure waters, breathtaking vistas, mystical sprites and gods depicts paradise.

Mythical Fantasy is a growing genre, though there isn’t a big body of work in Buddhist and Tibetan mythology. With The Path of the Swan, the first in the Maitreya Chronicles trilogy, Charu Singh adds to this sub-genre. The Path of the Swan is detailed and descriptive. It effectively captures the interest of the readers and lays the base for the subsequent books.

If you have an interest in Tibetan Buddhism, this book is right up your alley. If not, you will enjoy reading it as an adventure drama with mythology, love and wisdom thrown in.

The Path of the Swan: The Maitreya Chronicles Part 1

This entry was posted on February 2, 2015 by artikaaurorabakshi in Book Reviews, Fiction, Mythology and tagged buddhist and tibetan mythology, Charu Singh, The Maitreya Chronicles, The Path of the Swan.