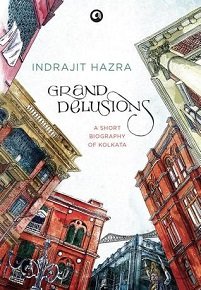 “The sun goes around the Earth once in a year.” So begins Indrajit Hazra’s biography on Kolkata, the city that harbored (and harbors) great delusions about itself, as the ‘cultural capital of India’ and the keeper of shonshkriti.

I was born in Durgapur and have Sikh parents who are lovers of all things Bengali. I take that love from them and through my work years frequented Kolkata and was fed on a diet of Rabindra Sangeet, Satyajit Ray, Durgo Pujo, mustard fish, sondesh and puckhas by friends and colleagues.

As Indrajit’s book made me realize, there is much I had not learnt about the city where I had spent precious work years. The book is rich in little details -the north-south and Maru-Bong divide, how Bengalis came to eat so much sandesh, why the all important Indian-Chinese population has dwindled and why Mother Teresa was so successful in Kolkata? Back in the 1970s and 80s when the rest of India was cricket crazy, Kolkata was the only football crazy city. Where else then would you find the Argentina Football Fan Club? I figured the subtle and not so subtle differences between the various Communist parties, the Naxal movement that originated in Naxalbari and the unique charm of Didi Banerjee.

Grand Delusions does not follow the city in a chronological fashion. Instead, the book touches upon history, culture, politics, cinema and people that have shaped this city. Even as he makes concessions for the city’s delusions, Indrajit dispassionately lays down the factors that have made the city so dysfunctional. The author also goes beyond the city to understand the city better; thus, the Naxal movement and the Nano debacle find their way into the narrative.

At the very beginning of the narrative, Indrajit mentions that this book is not a history of Kolkata, and he is only writing a story of his notion of the city. Among other things, I felt nostalgia for Park Street, the sweet shops at every street side and the seedy cinemas where women would not venture for the morning screenings of semi-porn movies. I wanted a longer trip down memory lane; perhaps that is the reason the book ended a tad abruptly for me. I was looking for more stories on food, fashion, Bata shoes, weddings, trams, the metro, the rickshaw pullers, and disparate people who make up this amazing city in disrepair.

That I guess is wishful thinking, because you cannot condense Kolkata and its people into 139 short pages. But for any Kolkata lover, this book will be a delight to read!