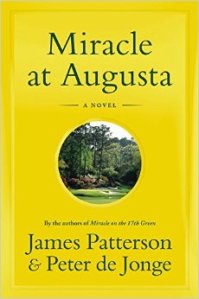 “Golf is a number. That’s all it is, and the only way to see if we’re on the right track is to keep score. So as my grandfather used to say, ‘No gimmes, no mulligans, no bullshit, let’s play golf.’”- Miracle at Augusta

With the number of hours that I spend at the Royal Colombo Golf Club, it was but natural for me to pick up James Patterson’s ‘Miracle at Augusta’ the moment I saw it. This is the fourth book that the well known Patterson has co-authored with Peter de Jonge.

I don’t play golf and even though I have watched the sport on television, it has only been because of lack of choice- the remote has been in the hands of my husband or sons.

The Ryder cup has been interesting to watch however. Reason one, because it is a legend in itself, with golfers from Europe competing against their American rivals for glory, prestige and sometimes ego. Another reason???- well, some of the golfers are bloody good looking and their suave style is much more impressive than some of the others in the other combative sports that are televised.

Coming back to the point, the reason I spend so many hours at RCGC is because my husband and two sons play golf and I sit, facing the 8th hole green reading- for pleasure and because I review manuscripts and books for The Good Book Corner.

So when Miracle at Augusta came up for review, I had to pick it up. There have been movies and books about this great sport that gentlemen play and I was interested to see if this book could help me understand the allure.

Miracle at Augusta picks up Travis McKinley, the famous golfer on the PGA Senior Circuit, living the life of his dreams. Everything is the way it should be until he screws up and forgets that golf is a gentleman’s sport. With a suspension and anger issues, redemption for Travis comes in the form of a troubled teenager, with issues of his own and ‘ a natural golf swing’. This first person narrative takes the reader on an inspiring, emotionally charged and moving journey, where Travis and his prodigy set out to face their own demons on the world’s most revered golf course. And as the title clearly points out, a miracle does happen, one that not only changes Travis’s life, but also his perception.

Given Peter de Jonge’s background, the aspects of the sport are impeccably presented. By the end of the book, I knew what par, birdie, eagle and bogey were. The courses have been described beautifully and I would love to walk the greens…………“When it comes to golf, Twain got it exactly wrong. Rather than a good walk spoiled, it’s a crappy walk made bearable. Golf takes what would otherwise be a tedious eight-mile hump, marred with far too much self-reflection, and makes it interesting. Just because you don’t know the name of every tree and bird, and couldn’t care less, doesn’t mean you don’t appreciate being outside, feeling the breeze on your skin and the ground underfoot. And just because you have a little hand-eye coordination, that doesn’t make you a lightweight.” (from Miracle at Augusta).

This is undoubtedly one of the best books that I have read in some time. Have always answered in the negative when people have suggested that I start playing too. After reading this book, I am not so sure. The thrill of the game and the allure of the courses is too tempting.