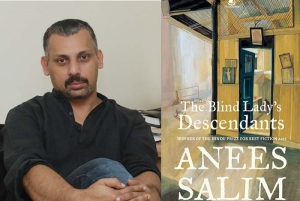 Anees Salim’s The Blind Lady’s Descendants won the Crossword Fiction Award this year,and Vanity Bagh won the Hindu Prize in 2013. His other wonderful books are Tales from a Vending Machine and The Vicks Mango Tree. Anees Salim’s twenty year journey to fame and recognition is both inspiring and daunting; he wrote, re-wrote and edited his books, and received innumerable rejects from publishers and editors.

Here is our interview with him, and here is our Mid-Day article “The Curious Case of Anees Salim”. http://www.mid-day.com/articles/the-curious-case-of-anees-salim/16233196

tgbc: The Hindu Prize in 2013, and the Crossword Prize this year! How does it feel to have two of your four published works win these coveted prizes?
Anees: I did not expect to win either the Hindu Prize or the Crossword Book Award. I attended neither functions. I watched the live webcast of the Hindu Lit for Life last year and tensed up as the announcement began. This time I was too nervous to check even the Facebook/Twitter updates, and Hansda Sowvendra Shekhar, a fellow nominee, sent me a congratulatory message the moment the winner was announced.
Two prizes in two years, I think life has been extremely kind to me.

tgbc: Four books published in one year. How did you manage that? What was the order in which you wrote these books?
Anees: These books were published in a span of two years, not one. But they were written over an excruciatingly long period of time. I wrote them in this order: The Vicks Mango Tree, The Blind lady’s Descendants, Tales from a Vending Machine and Vanity Bagh.

tgbc: What was the inspiration for TBLD?
Anees: Well, I started writing this book at a very disturbed period in my life. My first book was being rejected by publishers and agents, and I was living on the meager income from my first job. I did not have enough of food or clothes. What I had in abundance was a strong sense of vengeance. I wanted to hit out at the people I grew up with, I wanted to somehow mock them for being so ruthlessly cynical, for making fun of my desire to be a writer. Then I found myself writing about a family that bore a close resemblance to mine, set in a town that was the mirror image of my hometown. Over the drafts my anger started to wear off and I could make many characters amply rounded, but some refused to be changed or diluted and remained as fierce as in the first draft.

tgbc: Who is your favorite character in TBLD, and why?
Anees: The blind lady, of course. I drew her from life. She was my maternal grandmother who knew every corner of the house she lived in. In fact, she knew every nook and corner of the house, which had a complicated layout, so well that I used to wonder if she was pretending to be blind to solve some big family mystery.

tgbc: What are the challenges of being a writer of literary fiction (if I may call your books that)? (In terms of finding a publisher, competing with commercial fiction for a space on the list, promotion of the book and others).

Anees: I think the biggest problem literary fiction faces is visibility. I always find literary fiction pushed to the least visible racks in a store while stacks of commercial fiction meet you at the entrance, glowing under LED beams. I am not complaining. I should not even. Every genre needs to survive in this world.

tgbc: Did you approach the publishing houses on your own or did you go through a literary agent? What has your experience been in getting a home for each of your books?

Anees: In the beginning of my writing career, I used to send manuscripts directly to publishing houses, and I got only rejection mails in return. Then I found a literary agent, Kanishka Gupta of Writer’s Side, and life has been much simpler since. He found publishers for my three books in less than a month.

tgbc: Is there less attention paid to literary fiction, vs commercial that seems to bring in more moolah?

Anees: I think so.

tgbc: You do not go for book launches, and live promotions. Does this create a problem in these times, when authors are campaigning hard to make their books visible?
Anees: True, I don’t attend book launches or promotions. Since I won the Hindu Prize last year, my books are adequately visible in the market even though I am not. And I don’t think my books will sell more if I start campaigning for them. I possess no such charm.

tgbc: You created the character of Hasina Mansoor on FB and she has quite a following there. Do you think that was effective in marketing the book?
Anees: Yes, she had quite a following on Facebook. But her virtual friends were more interested in flirting with her than reading her ‘biography’.

tgbc: Most of your books have Muslim protagonists. Is that deliberate, because to me, these characters were any Indian (in the sense, (at least in TBLA) there is no religious or community reference that is not part of the larger Indian cultural landscape!

Anees: I think it is easier for me to write stories with Muslim protagonists and backgrounds. I am armed with an insider’s view when I write about Indian Muslims. But the first character I ever created was a Brahmin, Teacher Bhatt of The Vicks Mango Tree, and he remains one of my favourites.

tgbc: What is your typical day like, and where does writing fit in?

Anees: I have a day job in advertising. That leaves me writing late at night or early in the morning. I try to write for 2-3 hours every day and if I can manage 1000 words in one sitting I am a happy man.

tgbc: What do you do when you have a writer’s block?

Anees: I accuse people around me for causing it.

tgbc: Who are the authors that inspire you? (I thought the book was reminiscent of Marquez in many places).

tgbc: How many books do you think you have still left in you? (I read that you are working on a fifth!)

This entry was posted on June 14, 2015 by Preeti Singh in Interview, Interviews and tagged Anees Salim, Crossword Fiction Award 2015, The Blind Lady's Descendants.