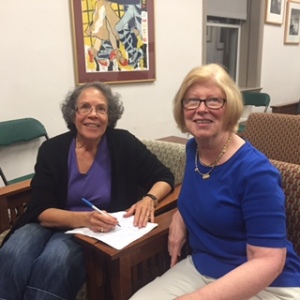 The school year starts for children, teachers, parents, administrators, state department, police, and even tutors! In my second year of retirement after 28 years of teaching in the Scarsdale Schools, I still yearn to be connected to the educational setting.  What a great time I spent reading Ms. Murphy’s Makeover by Jacqueline Goldstein, a tale of an English teacher in an urban high school. The author herself taught high school English for 25 years in the Bronx giving the book much credibility.  It’s all there: teachers who love teaching, kids growing up in both urban and suburban environments, school celebrations, exams, test answers being changed, family life, romance, and an ending you cannot miss. I thoroughly enjoyed it, loved the characters, and couldn’t put it down! Teachers of all levels and subjects will appreciate this one.

Author Jacqueline Goldstein develops her plot filled with adventure, fascinating characters, and surprises.  Kids and teachers observe each other’s clothes, shoes, hair, body shape, teaching styles, routines, and expectations during the many hours they spend in school. Everyone keys in on academic, social, and emotional needs and wants.

The main character Charlotte brings Shakespeare and poetry into her classes instead of just preparing for the Regents exam and encourages students to keep a journal. Valerie’s writing and Ms. Murphy’s inspiring remarks provide an interesting commentary on the plot throughout the chapters.

Especially unforgettable is Dean Theo Lagakis, who comes to education as a second career and undergoes a makeover of his own.

Ever worried about someone getting hold of your phone and sending messages with it? Not up on technology, that’s exactly what happens to Charlotte who also misses an important text.

“You should put something else on, Charlotte. Something warmer.”

She ran her hands over the soft fabric of her robe. “I’m comfortable.”

“No, Charlotte, that would be you,” he said. “I’m going to get the moussaka.”

In Ms. Murphy’s Makeover Jacqueline Goldstein compares students and teachers, who are more similar than different. Valerie thinks her strict grandmother fails to notice details about her own teenage life while Charlotte ignores in her marriage to Francis.  Savvy students let teachers know when an observer is about to enter a classroom.  Besides teaching students, teachers help new staff as well as those in trouble due to school politics.  Can you not read this book?

Goldstein artfully entices the reader by letting out little secrets a bit at a time, which compels the reader to want more and more.  She wraps it all up at the end still putting in a few more surprises. As a veteran teacher I loved the author’s interactions between students, teachers, administrators, and PTA members.  I emailed Jacqueline to find out more!!

jas : Since you taught high school English in the Bronx for 25 years and both you and Charlotte are mothers with two daughters, how much of the story is autobiographical?

JG : There are certainly autobiographical elements.  But much of the book is a combination of autobiography, observation, and imagination.  For example, like Charlotte I lived in Westport and taught in the Bronx, straddling two worlds.  But unlike Charlotte I’ve been happily married to my terrific husband Zack for many years. Another similarity-one of our daughters became very sick when she was in high school.  The scenes in my book, which take place in Norwalk Hospital, came from that difficult period in our lives.  But the Murphy family breakfast in Chapter Two comes from my memory of another mother’s child behaving badly.  I was waiting in an acquaintance’s kitchen to pick up my daughter, then about eight, from a playdate when the older sibling of my daughter’s friend appeared.  This particular teenager complained about the food in the fridge, ordered her mother to go back to the store for something better, and insolently called her mother by her first name.  I was impressed by the mother’s patience as she bore it all with good humor.  Years later I borrowed that scene for my book, changing the names and the situation.

jas : The students in Ms. Murphy’s class are so believable! Was there a Rohan and a Valerie or were they composites of many teenagers over the years?

JG : They are composites.  Rohan typifies many brilliant kids with so much potential and not enough guidance.  Valerie is also like many of the young women I’ve taught.  She is a smart girl, a well-loved child, trying hard to overcome huge obstacles.  Although Valerie isn’t an actual person, she is true to life.

jas : You write marvelously about passion and/or lack of it between characters.  What’s your secret?

JG : Thank you! The secret is a wonderful writing group, formed at Sarah Lawrence.  We meet about once a week and this group became a safe place for me to share my first attempts at writing a scene about passion, or its absence.  At first it was really hard to expose my own tender feelings, but trust in the group gave me courage.  I wanted to show the loneliness of a stagnant marriage, and the transformation-call it a makeover-that can occur when mutual passion exists.

jas : How did you make leering Lagakis into such an endearing character?  My heart fell when I thought he might not make it.

JG : Lagakis acts like an immature macho jerk, no doubt.  But he has a great deal of physical courage.  And he admires Charlotte not only for her looks but also for her compassion.  Later we see his sadness as well.  He doesn’t want Charlotte to feel sorry for him, but his situation is pitiable.  I am glad you came to find him as a sympathetic character.

jas : The technique of having Valerie’s Journal accompany various chapters to give a different point of view is very effective.  How did you think of it?

JG : The voice of Valerie lives in my brain, probably as the result of reading so many journals.  Besides shedding light on the smart savvy kids who populate the Bronx, I thought her journals would be a good way to show how clueless Charlotte is, at the beginning.  As Valerie says about Charlotte, “She’s a nice lady and all but she has no idea.” One of my classmates at Sarah Lawrence also helped by reminding me that Valerie’s journal entries must advance the plot in addition to providing a different point of view.

jas : Problems like changing answers on state tests have plagued school systems and have been in the news over the past few years. In your book you’ve portrayed tensions in test taking and monitoring exams which affects students, families, teachers, and administrators. Any thoughts about how to change this situation for the better?

JG : I think we need to reduce the emphasis on standardized tests.  Programs to prepare students for test taking are often implemented at the expense of art and music , and take all the joy (Charlotte’s poetry lessons) from school.  I suspect the only real benefit goes to those who make and market these tests.  I also believe we should stop evaluating teachers on the basis of students’ test scores.  This is unfair.  Most importantly, schools should not be run like business, with bonuses for high scores.  I think we should remove the financial incentives which lead some educators into temptation.

jas : How long has writing been a part of your life?

JG : I have been writing for pleasure since I learned to write.  A composition was always my favorite homework.  But my first published work did not appear until I was in my thirties.  It was published in the now defunct Westchester Section of The New York Times and was about being a stay-at-home mom returning to work.  I was published in that section of The Times a few times, writing light humorous essays.  And then an excerpt from what was to become this novel was published by The Westchester Review.

jas : Is this your debut novel?  How long did it take you to write Ms. Murphy’s Makeover? Is there a sequel or a movie being planned?

JG : Yes, this is my debut novel.  I wrote the first draft in 18 months, but workshopped and polished it for several years.  Now that this novel is out in the world, I’ve started to write a sequel, of sorts, but am not sure yet about the shape it will take.  I do know that the characters will be the same as those in Ms. Murphy’s Makeover. As for a movie, I have yet to hear Hollywood calling, but I would definitely take the call.

jas : At what point of your writing career did you attend classes at Sarah Lawrence College?  How did their Writing Center help you as a writer?

JG : I attended classes at the Sarah Lawrence Writing Institute after I retired from teaching.  The Sarah Lawrence classes really were the start of a second career and a whole new life for me.  I encountered wonderful teachers and new writing partners whom I now count as true friends.  One of these friends connected me with my publisher, Black Opal Books.  She actually sent a query letter to them without my knowledge, and they expressed interest.  Otherwise I might still be fine-tuning the manuscript.

jas : Writing seems to have changed your life in a good way.  Have you encountered any problems by becoming a writer?

jas : One final question.  How did you come up with the title, Ms. Murphy’s Makeover?

JG : Charlotte’s cosmetic makeover is a metaphor for covering up, for changing the appearance of a thing without dealing with the core problem.  All of the characters in the story are hiding something.  At the end of her journey, Charlotte removes her mask and begins life anew.