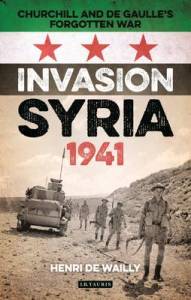 At the height of World War II, while the Germans were setting their sights on Moscow, Free French, British and Australian forces launched an assault on the Vichy French army in the Middle East on 8th June 1941. This joint initiative of Churchill and de Gaulle – codename “Operation Exporter” – led to one of the most shocking conflicts of World War II…

Very few are aware that while the war in Europe and Far-East changed the history of the world, there was another war being fought, not only to conquer territory, but to assert power, which would help shape the future of the new world.

What happened is Syria during WW2 is lost in the archives. Not much is known about this due to the censorship policy that was in place during the war. Britain and France were allies and news that Britain was fighting French forces in Syria, would have had a detrimental effect on it’s relationship with other allies/colonies.

The facts and details given by Henri De Wailly bring it all out in the open. The war fought was a war fought for control, between de Gaulle’s Free France and Nazi controlled Vichy France, where the French were forced to choose sides. Churchill’s reasons for actively participating in the invasion could have been  to undermine Nazi control or to prove Britain’s suzerainty.

The war lasted a little over a month, ending Vichy/Nazi and French occupation of the Levant. French Lebanon and Vichy controlled Syria gained independence, but for years to come, politics of the Levant would be influenced by policies and interests of the so called liberators from Europe.

A very detailed and interesting book for those who want to read history without the fictional gloss-over. It highlights the fact that most wars are fought for political reasons and not military ones.

A well-researched addition to WW2 history.