It’s The ‘Principal’ of It by Goolbai Gunasekara 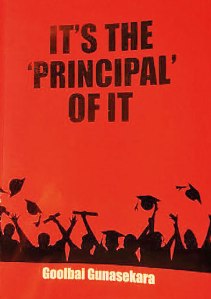 According to Mrs. Goolbai Gunasekara, “While the saying goes that teaching is a noble profession, it has always been one of the worst paid. Yet somehow, great men and women are turned out year after year, by this underpaid profession which keeps idealism in the forefront of its mind.” With over 55 years of experience, as a teacher and the Principal of Colombo’s prestigious Asian International School, what Mrs. Gunasekara says carries a lot of weight. Her opinions and beliefs strike a chord, especially with those who see “EDUCATION” as the pathway to a better world .

It’s The ‘Principal’ of It, is a collection of articles written by Mrs. Gunasekara, which have been published in the Lanka Monthly Digest over several years. In the form of a book, these articles can be termed as The Educationalist’s Bible– a treasure trove of quintessential guidelines on educating and nurturing young minds. While most are aimed at teachers and parents, enunciating the need to understand what the student/child really needs and how their own mindset and competence can affect the growth of student/child, some of the articles highlight the abysmal state of education in the country, due to the lack of foresight by policymakers.

Recently, I had a disagreement with some teachers in the school where I teach. The bone of contention was that students from International backgrounds do not respect their teachers and have the tendency to answer back. Knowing some of the students quite well, especially since some of them are my students too, I vehemently disagreed. According to me, respect is earned and cannot be demanded. Students today, are confident individuals and should not be expected to be meek. There was quite an uproar, especially by some of the teachers who still  believe in the archaic rules from their school days. While they are quite proficient in the subjects they teach, their sense of humour and world view is sadly paltry.

And then, I got my hand on Mrs. Gunasekara’s book….Since that day(29th March,2017), I have been waving this book at those teachers (happy to have the last laugh here, especially since school is now closed for two weeks) and recommending this book left, right and centre!

Quoting from Modernise Not Westernise, one of my favourite articles,   “…Youngsters of today do not have this mindset. They are far less inhibited. They tend to ask perky questions. They sometimes argue and answer back. They are often smart-alecky, not necessarily meaning to be rude….”

Eruditely written, the articles flow smoothly, without being repetitive or out of context.

Goolbai Gunasekara is herself the Founder Principal of the ASIAN INTERNATIONAL SCHOOL of Colombo. She has a Degree in History and a Doctorate in English Literature. She won the “Women of the Year” award in Education from the Zonta Club of Sri Lanka in 1996. She was Chairman of the Inner Wheel Clubs of Sri Lanka.

Other than books of humourous sketches, she has collaborated with the British Council and Sabaragamuwa University to write four books of History – specially aimed at Sinhala educated undergraduates. She has also just published a book on her Mother, Mrs. Clara Motwani, titled “Chosen Ground” which was a best seller and has gone into reprint due to great demand.

Goolbai Gunasekara and her husband “Bunchy” have a daughter and two grandchildren, Tahire and Rahul.

This entry was posted on April 8, 2017 by artikaaurorabakshi in Book Reviews, Contemporary, Non Fiction and tagged Goolbai Gunasekara, It's The 'Principal' of It.